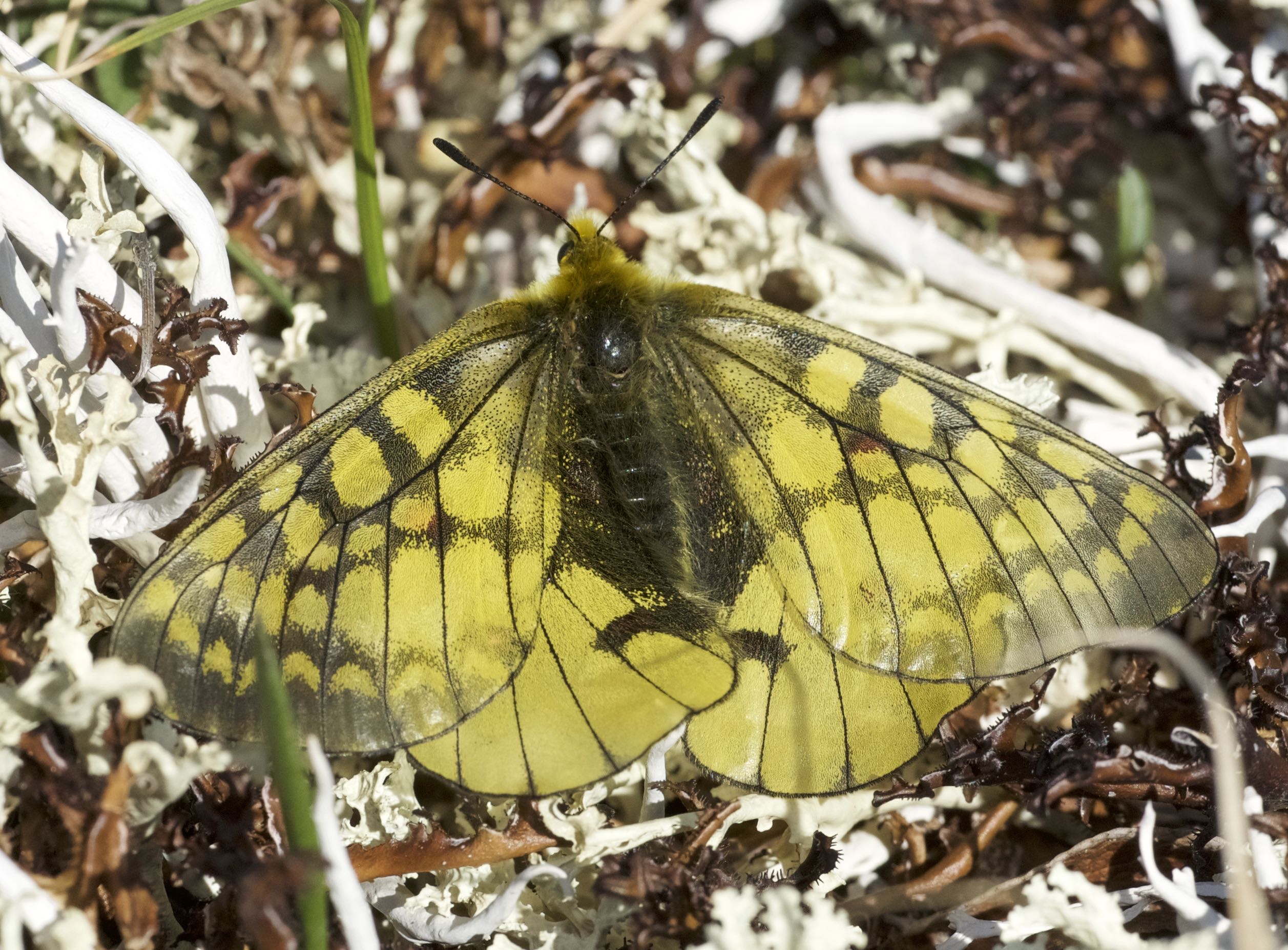 (Here’s Jeff’s final post from Alaska, maybe the most impressive for butterfly pictures! Above is a male Eversmann’s Parnassian, on Eagle Summit. – ed)

Sunday, June 16.
Today, the thought is to try for better photos – of Astarte Fritillaries, Polaris Fritillaries, Eversmann’s Parnassians and others.

When I arrive at Eagle Summit it’s slightly colder than yesterday, 51 degrees vs 52 degrees, but the sky is blue and sunny and there’s little, if any, wind. A perfect day! I wended my way to the rockslide area.

I spent about three hours amongst the rocks, trying to stand up on the steep slopes. A few Bolorian blowbys might well have been Astartes, but I didn’t see any that I was sure of. As a consolation prize, at least three Magdalena Alpines cruised the rockslides and, on a few occasions, landed close enough to me to enable reasonable photos. A Melissa Arctic landed near me and added another species to this trip.

At about 1 pm, the winds picked up considerably and I decided to call it a day. I had succeeded in obtaining identifiable photos of my three targets, Taiga Alpine, Early Arctic and Astarte Fritillary. Plus, I had the bonus butterfly, ‘Tanana’ Chryxus Arctic. Back in Fairbanks, I was able to switch my plane flights and fly out tonight. Mission accomplished – at least this part of it. 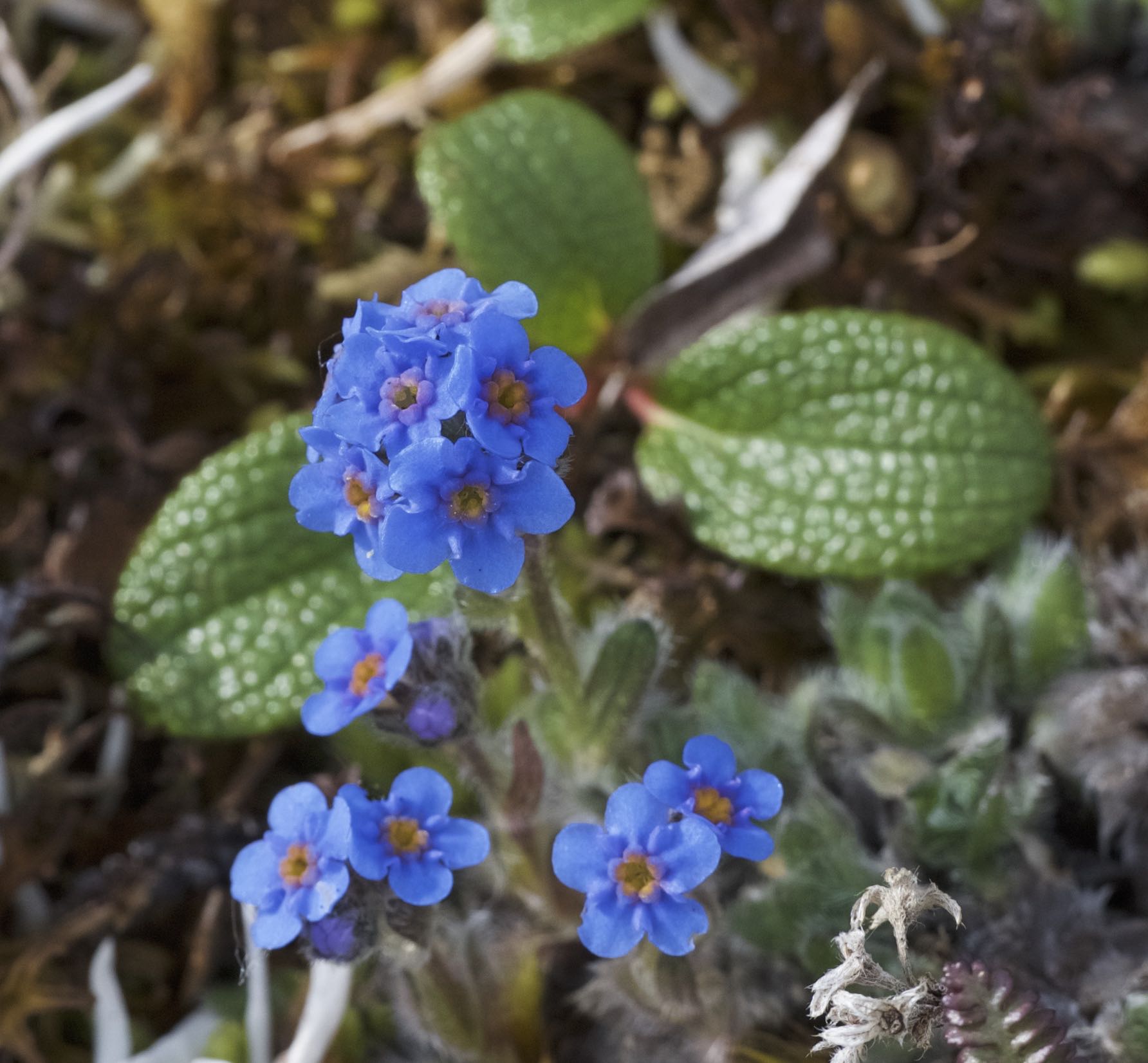 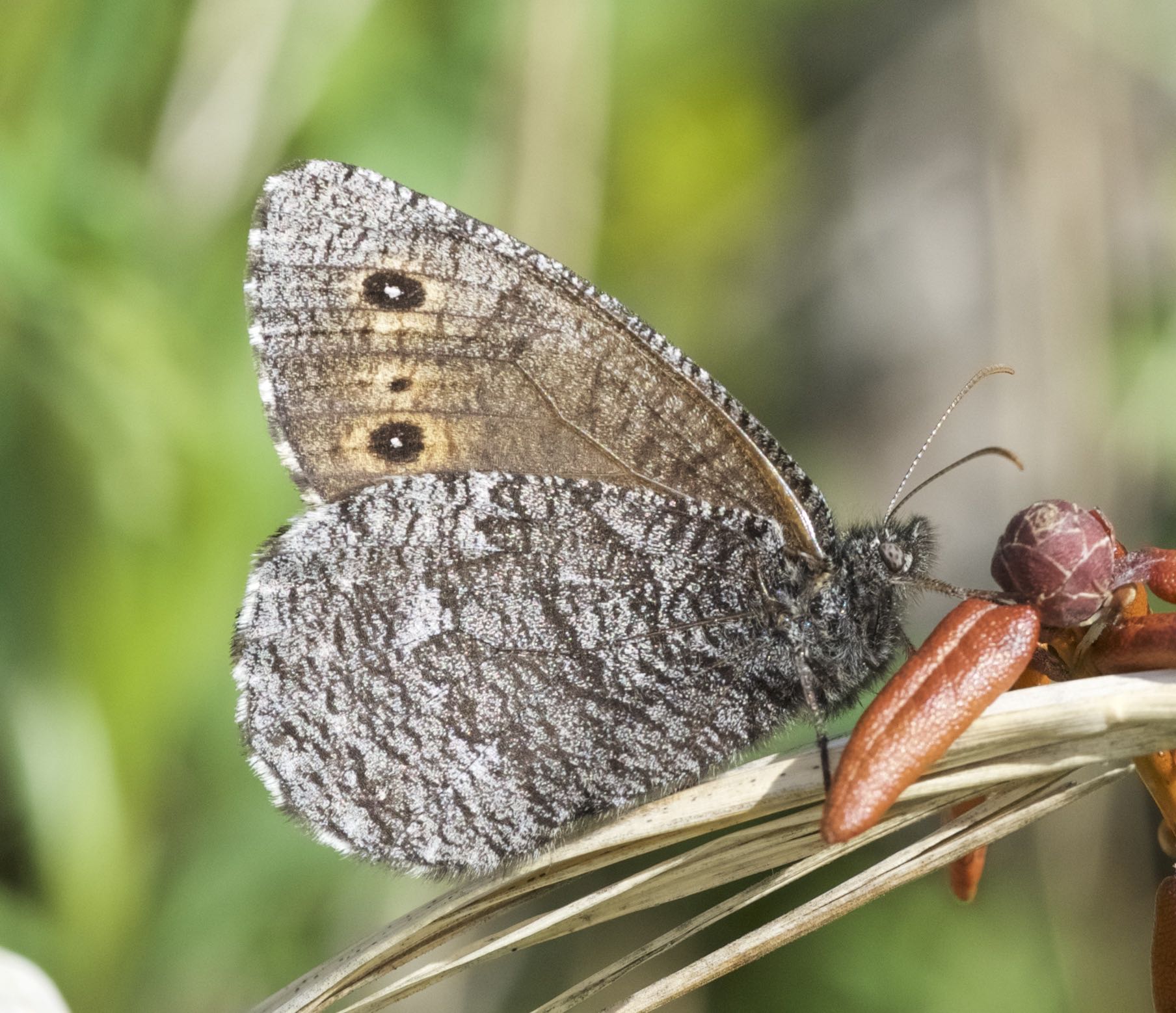 (Here’s a “lost” blog post from Jeff’s Alaska trip (he didn’t lose it, I did), enjoy! Pictured above is a Jutta Arctic. – Ed)

Thinking that it still may be too early for Astarte Fritillary, I decide to take a run for an arctic that has been recently described as a full species.  Although not yet evaluated by the NABA Names Committee, I, and most taxonomists, think that it probably best treated as a subspecies of Chryxus Arctic, ‘Tanana’ Chryxus Arctic.  It’s essentially identical but has slightly different mitochondrial DNA. The population is known only from the Tanana River Valley of Alaska, just entering adjacent Canada.  Reportedly, it inhabits open grassy areas in boreal forest. So, even though, currently,  I’d vote against species-hood for Tanana, being so close (relatively) to its very limited range, I think its worth the effort to chase it –  maybe it will prove to be a real species, and plus, I don’t really have anything else to do today.

I get to Spruce Road and the weather is beautiful, lots of sun and reasonably warm.  I drive up and down the length of Spruce Road.  No power line cut that I can see.  Worse, the habitat along the road doesn’t look good at all, mainly low shrubs, not really grassy.  I spend an hour looking.  Not only don’t I find any ‘Tanana’ Arctics, I don’t see any butterflies. Disappointing.  I decide to head out and look around the general area.  I drive aimlessly, something that I’m particularly good at.  About 8 miles away, I notice some telephone poles heading perpendicularly away from the Alaska Highway.  I take a U-turn and pull off the road.  I park, get my gear, get out of the car, and almost immediately see an arctic!  It’s a Jutta Arctic. Justa Jutta Arctic.

Unlike Spruce Road, there were quite a few butterflies – I ended up seeing 14 species.   And, after going through a couple more Jutta Arctics, ‘Tanana’ Arctics showed up – at least 7 of them!  So, a good day in the Tanana River Valley.  On the way back, another moose showed up.