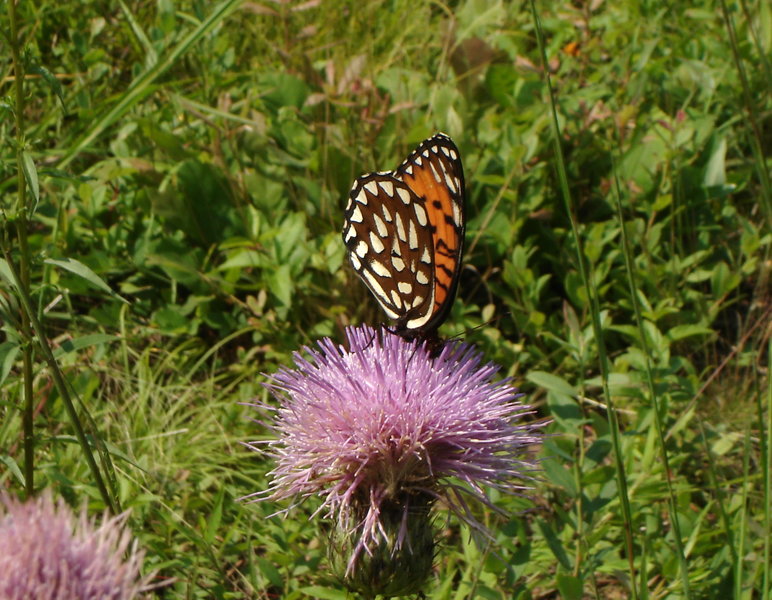 Want to help us conserve the butterflies of the prairie? You can donate and choose the Butterfly Habitat Network location of your choice, or just join and become a member!

This first of our seven part series will focus on one of our Butterfly Habitat Network (BHN) satellite locations. Today, let’s focus on the Prairie, a landscape with some butterfly species that really need our help: Poweshiek Skipperling, Dakota Skipper, Otoe Skipper, Regal Fritillary, and ‘Pawnee’ Leonard’s Skipper. We’ll look at two pieces. First, our Executive Director Marcus B. Gray takes a look at the conservation challenge for this area, and then we have a classic NABA piece by Barry Williams on the plight of the Regal Fritillary.
_______________________________________________________________________
The Plight of the Prairie – and its Butterflies
by Marcus Brandon Gray
In the years surrounding World War II, Aldo Leopold wrote about how our natural heritage was resigned to roadside ditches, cemeteries and other “odd areas.” Since the time of settlement in the Great Plains, land conversion has been the status quo. My own ancestors were party to the complete redesign of the Missouri landscape. It’s part of the reason I became a Wildlife Biologist in the first place. This land has given so much to us, it’s time to give something back.

Vast prairies once stretched across the Midwest from the Great Lakes to the Dakotas. The occupied range of prairie chickens, wolves, cougars, bison, elk and dozens of lesser-known animal and plant species was decimated. Only in my lifetime have eagles, beaver, otter, rattlesnakes, black bears and cougars begun to recolonize – many with assistance of state wildlife management agencies and an aging human population “moving to town” or otherwise off the land. These are the more adaptable fauna that are able to recover once government-sponsored removal campaigns were abolished.

The latest concern from the avian world is the marked decline of the bobwhite quail. Loss of native prairie and intensive farming practices have eliminated the “odd areas.” Quail were able to adapt for a time, benefitting from hedgerows while prairie chickens lost out; although they held on while farms were small. Quail are suffering significantly from the conversion of hayfields and pasture to fescue coupled with the bulldozing of hedgerows. In the East, the opposite is the case – too many trees. Butterflies share many of the same habitats critical to game animals, neotropical migratory birds and grassland birds. Waterfowl nest in the upland grasslands used by butterflies. When resident game bird enthusiasts decry roadside mowing or fund projects to create brood habitat, they are promoting butterflies. What are young birds eating in those forest openings touted by the ruffed grouse hunter or golden-wing warbler watcher? Insects. Caterpillars to be specific.

The excessive use of pesticides is putting the final nail in the coffin for several species. Reduced to fragments of their former habitat, these prairie remnants are subjected to over-management for conflicting objectives. Use of prescribed fire too frequently has also been raised as a concern to the already debilitated populations of rare butterflies and its use rarely considers the influence it has on non-migratory or primarily sessile butterfly species. While prescribed fire can be a welcomed stewardship tool, for rare prairie butterflies (most of which do not migrate, unlike the well-known Monarch), it can spell disaster for an already-crippled population. The recommendation of butterfly biologists is that fire treatments be implemented in such a way as to minimize mortality of caterpillars, pupae and adults by burning only 1/4 to 1/3 of a site at any given time so as to provide adequate refugia to foster recolonization.

The factors impacting these populations are complex and hard to generalize across the entire Great Plains but the story is well-documented for the tall grass prairie. Busting sod in 1850 was one thing. Our forebearers were striving for a better life and we owe a debt to them for that in one sense. However, there is little excuse for plowing native prairie in 2016. The tiling and draining that has gone on in the last fifteen years in Minnesota, Iowa and South Dakota is obscene. We should have learned from prior mistakes, learned from the Dust Bowl of the 1930’s. As additional pressures are put on producers to grow more food for an increasingly urban and disconnected public, we have real challenges to face in our food system and the people who grow our food for that matter. Farmers are aging and even with an interest in farming the operating capital, equipment and land costs are driving the intensification of agriculture. It’s like we have begun a reaction we are unable to stop.

The North American Butterfly Association (NABA) is a 501c(3) organization dedicated to the conservation and enjoyment of wild butterflies. NABA is gravely concerned with the precipitous decline of prairie butterflies, including but not limited to: Poweshiek Skippering, Dakota Skipper, Pawnee Leonard’s Skipper, Regal Fritillary and Monarch. Poweshiek Skipperling is listed under the federal Endangered Species Act as Endangered. We’re talking extinction here, folks. The butterfly is down to just three known sites in Michigan, Wisconsin and Minnesota The Dakota Skipper is listed as Threatened, is rapidly declining and will likely be lost if something is not done. Other species won’t be far behind. The grasses and forbs critical for the life history of these butterflies are controlled with widespread glyphosate and other herbicide use. Systemic and topical pesticides employed to control true insect pests are adversely impacting whole assemblages of native organisms. Extirpation of large mammals, namely bison and elk have removed major drivers of ecological function from the landscape. Butterflies are the canary in the coal mine for landscape-level impacts to the ecosystem. As the butterflies go, so go other wildlife.

With partners, NABA proposes creation of the North American Prairie Collaborative to develop a series of prairie reserves with the intention of restoring ecological processes that these butterflies evolved with. The idea is to secure funding to purchase contiguous parcels of sufficient size which will allow the group to explore bison serving as a keystone species once again, where compatible. Other programs within this initiative will work to canvass for Congressional designation of a butterfly semi-postal stamp, promote native vegetation establishment on public and private lands via USDA cost-share (conservation payments) and securing matching contributions from partners. Furthermore, conservation easements or leases will be used to increase the overall amount of habitat available for the prairie ecosystem while enhancing the working nature of farms and ranches in the region. Finally, butterflies will be reintroduced to make use of the newly-available habitat.

This collaborative has the potential to bring in non-traditional partners and develop innovative approaches to complex problems. NABA envisions participation from resident game bird organizations, large mammal groups, zoos, institutions of higher learning, state and federal agencies, tribal entities and more. There are some good efforts underway independently but there is a need for coordination to improve effectiveness. For more information about how to get involved, contact the author (Marcus Gray, Executive Director for NABA) at gray@naba.org.

The North American Butterfly Association (NABA) is a 501 c(3) non-profit entity headquartered in Morristown, NJ. The organization’s largest project is the National Butterfly Center in Mission, TX. Through an active Chapter system and engaged membership, NABA works locally to promote on-the-ground conservation work and institutes policy initiatives to further its mission. For more information visit http://www.naba.org. Connect with us on social media @NABAButterfly.

Winter 1999:
Regal Fritillaries in a Tailspin
a Story of East and West DNA and the Urgent Need for Conservation of a Flagship Species by Barry Williams
http://www.naba.org/chapters/nabasep/99_W_article.HTM

The Memorial Hall Library in Andover, Massachusetts is displaying several of Howard Hoople’s butterfly photographs during the month of November. You can visit the library to see the exhibit in person ( see http://www.mhl.org/artists for location, hours, etc.). Or you can see the twelve photos Howard chose (out of about 55,000 taken so far!) for the show at:

[Mike: Howard happens to be our Massachusetts NABA chapter president! Check out this awesome series of photographs; can you identify all of the butterflies?]

There will be a meeting on December 11th at 2:00 PM at the home of Dean and Sally Jue (3455 Dorchester Ct., Tallahassee) to plan our chapter’s 2017 programs, activities, and events. If you have suggestions for the 2017 calendar, please pass the information along to any of our chapter officers. Their e-mail addresses are on our chapter website at http://www.naba-hairstreak.com/contact.html. If you want to attend the meeting, please e-mail Dean at djue.hairstreak@gmail.com so we can accommodate you.